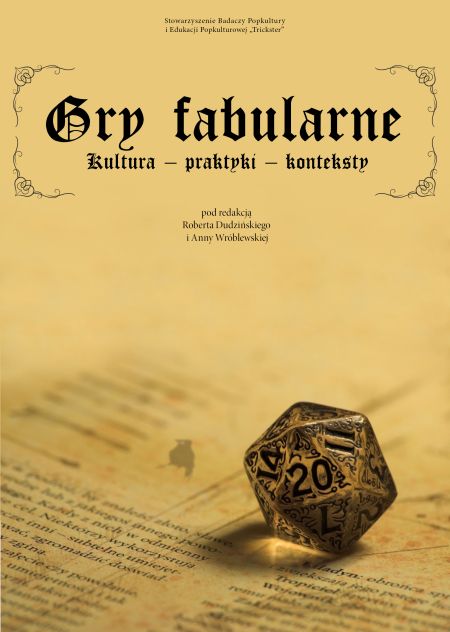 We invite you to read the new publication „Role-playing games. Culture – practice – contexts” [Gry fabularne. Kultura – praktyki – konteksty] It contains texts of researchers who analyse the cultural practices associated with RPGs. The publication can be downloaded free of charge from our website.

2014 is the 40th anniversary of Dungeons & Dragons, a game by Gary Gygax and Dave Arneson, being published by TSR publishing house. The title released in small run gave rise to a completely new type of games and thus planted the foundations for a number of socio-cultural phenomena related to RPGs.

Four decades of publishing role-playing games rulebooks and accompanying products made it a lucrative business and the RPGs created a fan culture with its own institutions, information flow and even sociolect. Due to this popularity the phenomenon of role-playing games was also noticed beyond the niche of enthusiasts.

This way they became the subject functioning in a variety of discourses. On the one hand they were the subject of moral panic fuelled by religious communities which broke out in the USA in the 80s which echoed in the public debate for a long time. On the other hand academic researchers took interest in the phenomenon of RPGs and a scientific discourse emerged from role-playing games which lends legitimacy to this reflection as a professional field of knowledge.

In „Role-playing games. Culture – practice – contexts” [Gry fabularne. Kultura – praktyki – konteksty] we publish texts with different subjects of research (next to the narrative role-playing games there are also LARPs and video games), as well as research perspectives. All of them are however similar as their authors try to look at specific cultural practices linked to RPGs.

Readers of the publication will find articles about the influence of „Vampire: the Masquerade” on contemporary vampiric culture, the creative freedom of authors writing books about RPG worlds, the strategy of adapting the works of Howard Phillips Lovecraft for games, staging a post-apocalyptic world in a LARP and the poetics of the environment narration in RPGs. We also included the bibliography of Polish scientific texts dedicated to the narrative role-playing games.

„Role-playing games. Culture – practice – contexts” [Gry fabularne. Kultura – praktyki – konteksty] is the seventh volume published by the The Association of Pop Culture Researchers and Pop-cultural Education „Trickster”. It was edited by Robert Dudziński and Anna Wróblewska, members of the Association. The scientific review was done by dr hab. Rafał Kochanowicz from the Adam Mickiewicz University in Poznań.

The publication can be downloaded HERE.

We also encourage you to read other bolumes published by the Trickster Association:

as well as the publications from members of the Association which are available on our website: