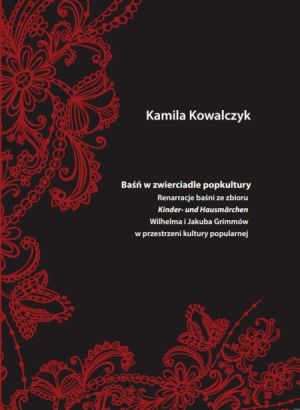 The twelfth volume of „The »Folk Literature« Library” [„Biblioteka »Literatury Ludowej«”] has just been released by the Polish Ethnological Society. The publication is the work of a trickster Kamila Kowalczyk who analysed renarrations of „Kinder- und Hausmärchen” fairy tale collection by Wilhelm and Jacob Grimm in the popular culture.

The book was published under the title „Fairy tale in the popular culture. Renarrations of Kinder- und Hausmärchen fairy tale collection by Wilhelm and Jacob Grimm in the popular culture.” [Baśń w zwierciadle popkultury. Renarracje baśni ze zbioru »Kinder- und Hausmärchen« Wilhelma i Jakuba Grimmów w przestrzeni kultury popularnej]. It will soon be available in scientific libraries and within a few months will be made available on the website of our Association.

„In 1812 Achim von Arnim and Jacob Grimm exchanged views via correspondence regarding fairy tales. The representative of Heidelberg Romanticism wrote to Grimm that writing the fairy tales down will be death of their world. He had not expected that such discussions will be also taking place two centuries later” – the author writes in the preface of her book. – „[…] It’s been over 200 years since the »Kinder- und Hausmärchen«, fairy tales written down by Kassel librarians, were published and these stories are still present in the culture. The subject of the study is the analysis of how so called Grimm themes and topics are functioning in various pop-cultural texts which were created after 2000, discussion of their functions and taking a look at the spectrum of the Grimm plots renarration phenomenon. This allows to notice the process of transferring the German fairy tales onto the pop-cultural ground which transforms and reinterprets it in many ways. In addition, the study also takes into consideration the cultural marketing, in the strategy of which also the stories by Grimm brothers can be found”.

– The study […] is one of the first Polish discussions devoted to the presence of Grimm themes and motifs in popular culture […] – writes in her review dr hab. Violetta Wróblewska, professor of Nicolaus Copernicus University. – The young researcher treats the Grimm tale as a basic material of many forms of artistic expression such as a work of literature, film, comics, video game, board game, or RPG, which gives us a rich and diverse cross-section of the phenomena. The author, referring to specific examples, exhaustively describes the mechanisms of processing known themes and motifs from Grimm fairy tales using the key term of renarration.

Dr hab. Urszula Chęcińska, professor of Szczecin University emphasised, however, that the study is an example inspired by author’s own research experience, supported by a sound knowledge of literature and cultural studies. – It will certainly be an impulse for further scientific research and organisational activities of future researchers and authors, as well as […] a methodological point of reference used for comparisons – noted the reviewer. – Specific atmosphere of Grimm „lust zu fabulieren” visible throughout the volume which is likely to become an important voice on „Grimm motifs” present in the pop-cultural sphere, is valuable in itself.

The volume was funded by the Faculty of Letters at the University of Wrocław.

The author – Kamila Kowalczyk – is a member of the The Association of Pop Culture Researchers and Pop-cultural Education „Trickster” and the Polish Society of Film and Media Studies. Currently she is working on a doctorate in the Institute of Polish Studies at the University of Wrocław. She has published articles in, among others, „Przegląd Humanistyczny”, „Literatura Ludowa”, „Perspektywy Kulturoznawcze” and collective volumes.